The Musée Bouchard usually displays sculptures in the former studio of the sculptor Henri Bouchard (1875-1960). Today, for the first time, old archive photographs acquired by the museum will be displayed, presenting, chronologically, the studios in which he worked.
Four places, coinciding with distinct vital creative periods are therefore 'hung' from the picture rails of the museum.
Next to the photographs, some sculptures will be displayed: some will be discernible on the old plates or others will have been created during the period that is referred to. This will allow the visitor to see the style in its real proportions which cannot always be grasped from a photograph. 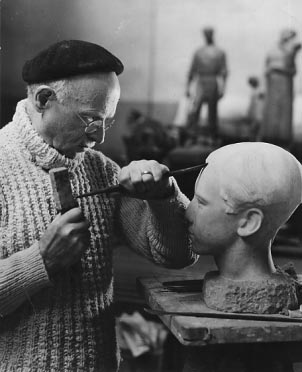 Some accounts of the time describe an enthusiastic 19-year-old student who was awarded a local grant in Dijon in 1894 (nude male figure Musée Bouchard), which allowed him to go to Paris to the National School of Art, (Ecole Nationale des Beaux-Arts ENBA) to the studio of the sculptor Ernest Barrias until he got the Prix de Rome in 1901.

During his years of study at the Art School in Dijon and then in Paris, Henri Bouchard did not have his own studio, merely a turntable near his neighbours.

Bouchard's first studio was in the Villa Medici in the Bosco, a pleasant, quiet setting, in which Bouchard worked a great deal, created there his first successful works which were shown and analysed in journals, exhibited in France and abroad and kept in the great Parisian museums (the musée du Luxembourg, the musée d'Orsay), and at Boulogne Billancourt (Museum of the 1930s) in the museums of Dijon, Lyon, Mont-de-Marsan and others throughout the country as well as abroad (the Metropolitan Museum in New York, the Pushkin Museum in Moscow).
The Roman visit was to be from 1902-1905 but Bouchard extended it into 1906, without a grant, so as to meet some orders. Few photographs have been found of these two periods, but some works, often the original plaster works kept at the Musée Bouchard, will be displayed next to the photographs. Thus, a great sense of realism prevails.

On his return from Rome in the summer of 1906, Henri Bouchard rented a studio in Montparnasse, at 17 rue Campagne Première and would use it from 1906 until 1924.
During this time he sought to confirm his own taste, independently.
The working atmosphere of the Villa Medici was naturally influenced by the National School of Art and as soon as he returned to Paris, his personal research into stylisation and austerity became apparent. (Monument to Pierre de Montereau 1908).
The style of his creations evolved very quickly going from the great realism of his period in Rome with complicated angles and many curves to research on monumental art constructed on a large scale with well defined edges and the dominant straight lines of art deco.
So, this major period was very fruitful and reflected the artist's rapid development. (Le défrichement, the Clearing, 1907, the Young Girl and the Gazelle, 1912, the façade of the Printemps shop, 1920).
The studio soon became too small and so Bouchard considered moving, but the war halted all his projects.

In the west of Paris, in Auteuil, some areas were still undeveloped and land was inexpensive, so in 1920 Henri Bouchard acquired a small house and garden as well as a good size piece of land from a neighbour in order to be able to build a studio to his specifications.
When the lease of the house ended in 1924, Henri Bouchard asked Léon Chifflot, an architect with whom he had studied in Rome, to build his studio. Outstandingly well lit, by an enormous glass roof, it was used by the artist from 1924 until his death in 1960, in total 36 years of creation.
On this site, today preserved in its original state and having been turned into the Musée Bouchard, those works most familiar to the inhabitants of Paris were created : the façade and the statues of the Church of St Pierre de Chaillot on avenue Marceau and the huge Apollo on the terrace of the Palais de Chaillot.

The photographs from the 1930s show the artist in the studio on the rue de l'Yvette among works that are still there today.
The place which allowed the artist all the space he needed to work seems empty when considering the incredible collection of works that can be seen there today.
The museum's extensive collection is a consequence of the complete rejection in the 1960s and the following years of the figurative art of the inter war period, considered too classical. Modern art brought about great change.

So the studio because full of works from official storage facilities that had become too full; works were acquired extremely cheaply, as they were unappreciated, from flea markets, from second-hand dealers or at auctions; works were also received, always gratefully, as gifts from individuals. Conserved at the museum, they have been studied and exhibited to the public.