The clay model could not be kept in the long term, so plaster casting allowed the sculptor to preserve his work. Although plaster is fragile, it keeps very well in a dry atmosphere and if protected from sudden knocks.

The vertical plane of clay, attached to the "spiked panel", is covered first with a fine layer of plaster, then a thicker layer.

Once the plaster is hardened it is detached from the clay.
The "hollow" or negative obtained is covered with a thick layer of plaster, once dried, will give a positive low-relief.

This large mass of plaster is very fragile.
It is reinforced with hessian soaked in liquid plaster which also allows for the fixing of wooden batons. 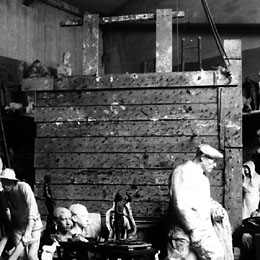 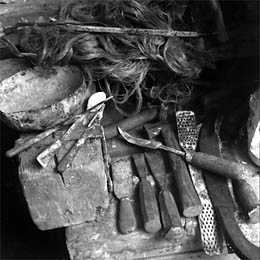 The clay, abundantly wetted, is firstly covered with a thin film of liquid plaster that Bouchard coloured with "launderer's blue" spattered onto the statue.
Being very liquid it thus penetrates easily into the smallest crevices of the model.
This layer of about 0,5cm in thickness is then covered with a 3-4cm layer of white plaster.
It is necessary to wait until the plaster hardens before it can be removed from the mould. 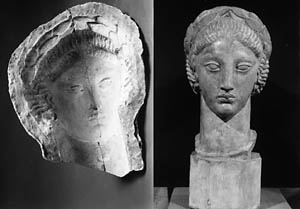 A hollow imprint is thus obtained.
After cleaning away the remains of the clay, it is covered with a thick 3cm-layer of plaster, after having taken the precaution of applying a thin film of liquid soap or linseed oil on the internal surface of the negative to avoid adhesion.

Once the plaster in the negative has hardened it can be removed.
If the shape is simple, the de-moulding is effected without difficulty and the cast can be preserved.
If the shape is complicated, certain areas may remain attached and the de-moulding can only be carried out by breaking the negative thus the term "plaster waste mould".
This example, an exact copy of the clay model, is called a "master-cast".