Like most sculptors, Bouchard was a modeller, he needed a method of realisation that was rapid in order not to impede his creative spirit. 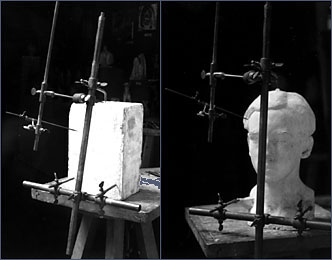 Having regard to various difficulties and risks of cutting directly into a stone block without studying a pre-worked model, he employed the method of transfering reference points by compass from the master-cast.
For his creation in stone, he first made a model in clay, which was then cast in plaster.
The stone block was rough-hewn by an artisan stone-cutter, thesetter of the reference points, who stopped a few millimetters before the final stage.
Bouchard more often completed the finishing of the work himself. 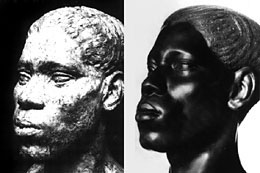 The tools for carving in stone

The compass or "point-setting machine" allowed for the very precise transfer of measurements from the master cast to the stone block.
This technique allows the chipping away of the stone little by little and very precisely thus avoiding possible errors.
While the artisan stone-cutter carried out this work, Bouchard was able to create other works in his modelling studio, far from this laborious activity and related noise.
He preferred in general to carry out the finishing of his work as all the sensitivity of the model is found in these last millimetres to be carved. It is also possible to make any last minute modifications having regard to the master-cast.
For large monuments, the practitioners Antoine Orlandini and the Attenni brothers aided him. 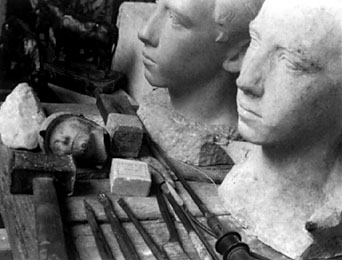