According to the complexity of the model one of the following techniques is used.

The mould realized from the plaster model is hard and can only be used once :
Natural casting sand is a silica-sand (clay-sand mixture) mix which, when moistened and well packed, takes an imprint very well (synthetic sand is being more and more used today).
Fired in a kiln it dries out and by increasing the temperature it hardens and becomes resistant to molten bronze at 1200°. 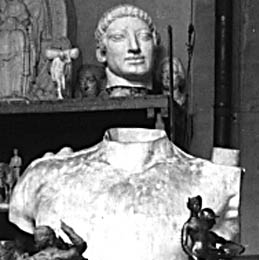 The mould is made in two parts in a metal frame.
If the model cannot be created wthin a single plane, it must be cast in several pieces.

Several parts of the bronze statue are thus obtained which must then be assembled, having made provision for this at the outset (e.g. mortise and tenon or Roman joints).

Used for smaller models and for very complex forms.

First of all, the caster makes a wax model from a master cast, with the aid of a flexible mould that will not damage the plaster. This is an exact copy but having a thickness of only a few millimetres, that which is required to obtain a good result in bronze). 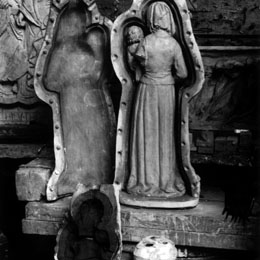 This wax example allows for the placing of a refractory material around it, that resists molten bronze at 1200°. 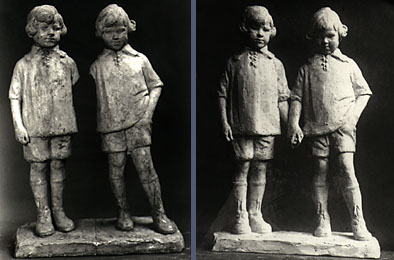 The twins (1922)
left : The plaster is divided in two parts to realise the mould that will serve to cast the bronze.
The arms are cast separately.

Patination of the Bronze

So as to obtain a more attractive aspect in the finishing of the bronze (which after casting and left exposed will oxidise very irregularly), an artificial patina is applied.
Art bronze is an alloy which usually contains 90% copper, 6-8% tin and 2-4% lead. It is thus a yellow metal. 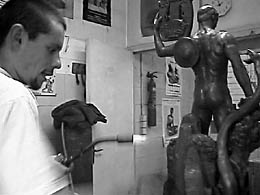 The bronze is heated by blowtorch to about 80°, and chemicals are applied that attack the entire surface; this will produce different copper salts according to the agent used.
A palette of colours is thus obtained going from black, through green, brown, red..., which can also be fused to create nuances in the finish.

Realisation of bronze patination on a model of "Apollo" at the "Fonderie d'Art de la Plaine" (St Denis / Paris).